LineStorm Playwrights presents,
in association with Beulahland Coffee and Alehouse,

THEY'VE TURNED OFF THE WATER!
by Dan Kitrosser 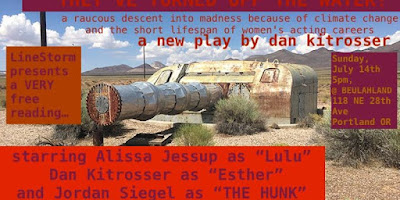 Synopsis:
A new play about a raucous descent into madness, because of climate change and the short lifespan of women's acting careers.

Playwright:
Dan Kitrosser is an award-winning playwright, screenwriter and storyteller. He is the founding Artistic Director of Writopia Lab’s Worldwide Plays Festival, a festival of plays written by teens and tweens from around the country. Fellowships: Sundance Screenwriting Fellow, TimeWarner 150 Fellow, Harold and Mimi Steinberg Fellow for Playwriting.