Last month Portland Center Stage announced their 2014-15 season lineup in a special event. The interpreted performance dates are not yet available, but below is the season to give you a preview. The season ranges from newly written world premieres to classics, musicals and comedies and dramas, and the ever popular Christmas shows -Santaland Diaries and a return this season's Second City's Twist Your Dickens. We will let you know as soon as the interpreted performance dates are set and when you can purchase season tickets.

This groundbreaking musical, loosely based on the career of The Supremes, takes you to a revolutionary time in American music history when rhythm and blues blended with other styles of popular music and created a new American sound—Motown. In the ‘60s, three friends form The Dreamettes and get their big break at an amateur competition, and begin singing backup vocals for a major star. As their own fame grows, however, things begin to spin out of control when their agent’s business maneuvers trump their friendship, and fortune and success take them down a path of heartbreak and turmoil. Over two decades The Dreams, as they become known, learn hard lessons about love, trust and the changing tastes of the American public.

Winner of 6 Tony Awards, including Best Book of a Musical.

A Stenographer, a Geographer, and a Typographer want to share what they do for a living. In their presentations, variably energetic and dispassionate, focused and distracted, it becomes clear that these three may not be strangers … but what is their relationship? What seems to be a simple panel discussion becomes something “funny, provocative, psychologically revealing, intellectually stimulating and thoroughly enjoyable” (San Francisco Chronicle). From the author of The Receptionist and A Small Fire, The Typographer’s Dream is a “smart, hilarious and thoroughly unexpected treat.”

Back for a second year of unpredictable mayhem! This complete send-up of the holiday classic, fully festooned with the improvisational genius behind the legendary comedy troupe The Second City, is never the same show twice! Scrooge, Tiny Tim and those know-it-all ghosts find themselves hopelessly mixed up in zany holiday sketches with anachronistic characters, uproarious improv and an ever-changing stable of drop-in local celebrity guests. Updates for 2014, and the audience’s input, means this show changes with every performance and will be a fresh experience for the new season.

The Santaland Diaries
By David Sedaris
Adapted for the stage by Joe Mantello
November 23 – December 28, 2014

Based on the outlandish and true chronicles of David Sedaris’ experience as Crumpet the Elf in Macy’s Santaland display, this hilarious cult classic features comic encounters during the height of the holiday crunch. Portland favorite Darius Pierce returns as Crumpet! Reserve your tickets early—this show consistently sells out.

Following the dream for a better life, a family risks the dangers of illegal immigration to leave Mexico for Chicago. But adapting to a new life in America and escaping a past filled with betrayal is hard for Medea, even while husband Jason is succeeding—dangerously so. As Medea struggles to adapt to a new culture and fights to keep her family from splitting apart, the intense love she feels for her husband and child fuels desires that are destined for tragedy. Playwright Alfaro’s stunning modern take on the Euripides classic tackles immigration, family, tradition, mysticism and the explosive moment when they all collide.

"All family reunions should be this satisfying… The Best New Play on Broadway!"
Ben Brantley, The New York Times

Polly and Lyman Wyeth are a quintessential California success story. Well-connected politically, comfortable financially, and enjoying their retirement years in Palm Springs, where they can still move in the Republican, old Hollywood social circle of their working years. So what if Polly’s sister and former screenwriting partner is a just-out-of-rehab liberal, and their grown children are also ideological opposites from their parents? Well, families accept these differences, don’t they? But then the Wyeth’s children join them for the holidays, and daughter Brooke announces to her family that she is about to publish a memoir dredging up a pivotal event in the family's history that they would prefer stayed buried. This time, a line is drawn in the desert sands that neither side may be ready to cross.

From the award-winning playwright (Substance of Fire) and creator of the hit television series “Brothers and Sisters.”

Return engagement after a 9-week sold out, hit run in the spring of 2013!

Portland is garnering lots of attention lately—for our leadership in sustainability; for our food scene; for being, well, weird. And now we’ve caught the attention of writer/actor Lauren Weedman. In the few months she spent here in the spring of 2011 performing her play BUST, Lauren’s imagination was captured by all things Portland. And so we asked her to write a play. About Portland. How will this former Daily Show faux-spondent treat us? What does Portland look like through Weedman’s unique lens? Are we brave enough to find out? Lauren is currently a co-star on the new HBO hit series Looking, but returns to Portland for this limited run.

The romantic comedy classic Cyrano de Bergerac, in a fresh translation and adaptation by Michael Hollinger (Opus) and Aaron Posner (Sometimes a Great Notion, The Chosen). Set in 17th century France, Cyrano tells the story of a great swordsman with a beautiful soul, who is handicapped by a huge nose that makes him believe he is incapable of being loved by the beautiful Roxane.  When he learns that Roxane and a handsome young soldier named Christian are infatuated with each other, he writes beautiful love letters for her suitor that lead to a tragic love triangle. Filled with swordplay and wordplay, Cyrano is beloved for its affirmation of love, friendship, and the power of a well-developed sense of humor.

One man, six guitars, and a true story of love, loss, family loyalty and the redemptive power of music. Direct from an award-winning run at the 2013 Edinburgh Fringe Festival, writer/performer Benjamin Scheuer (winner of the ASCAP Cole Porter Award for songwriting) shares his gripping coming-of-age tale. Directed by Sean Daniels, whose work has been seen at The Kennedy Center and Actor's Theatre of Louisville, The Lion is a candid, poignant, charming offering from a next-generation troubadour.

Vanya and his stepsister Sonia (where have we heard those names before?) have only known their family’s farmhouse as home; they’ve lived here their entire lives. Sister Masha, however, lives the glamorous life of a famous movie star, traipsing around the globe and living her life in gossip magazines. When Masha descends upon the family home, her boy toy Spike in tow, the dire predictions of cleaning woman Cassandra (ring a bell?) may be about to come true. In this hysterical mash up of Chekhov's four major plays with Snow White and the Seven Dwarfs, Ingmar Bergman, The Beatles, The Oresteia and even a little Maggie Smith thrown in, “you’re likely to find plenty to make you laugh even if you’ve never read a word of Chekhov” (The New York Times).

All titles subject to change.
Posted by Dot Hearn at 2:35 PM No comments: 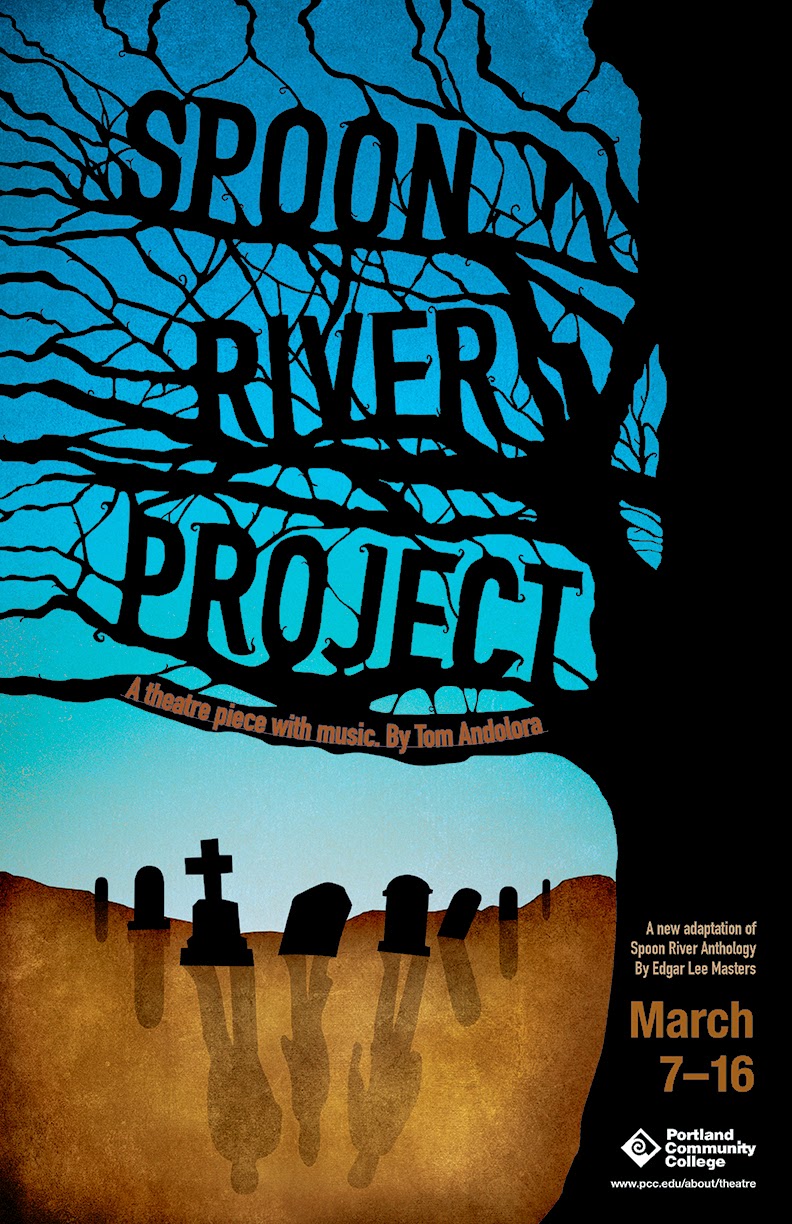 In this beautifully haunting play based on Edgar Lee Masters'Spoon River Anthology, the former residents of the small but complex town of Spoon River examine their lives and longings for who they were and what might have been.

As the citizens reflect on the dreams, secrets, and regrets of their lives, they paint a gritty and honest portrait of the town as their pasts are illuminated.Coupled together with beautiful songs of the late 19th century, and costumes of the period, this production will take audiences back to a simpler time and place, but the complexities of the human heart are revealed to have been just as mysterious, beautiful and engaging.

Often compared to Thornton Wilder’s Our Town, this American masterpiece is an Oregon premiere! 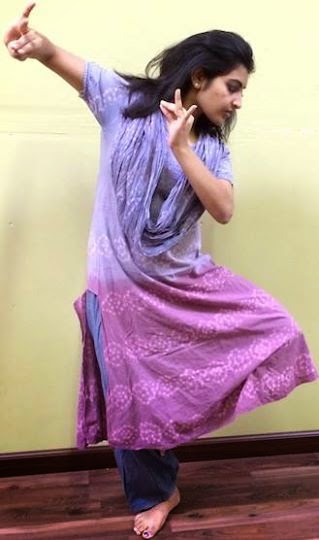 FREE for all, welcome. Suitable for all ages.

Funded in part by Community Program Grant from Beaverton Arts Commission.
The new program is funded by the non profit Beaverton Arts and Culture Foundation.
Posted by Dot Hearn at 5:44 PM No comments: Scott’s Emily is nicely complemented by Tom Bloom’s John Bridges. Bloom’s Tom is low-keyed, even tempered. His movements are restrained, thoughtful, and deliberate, and he speaks with an unruffled easy rhythm. Sure, occasionally he allows us a glimpse of a tortured grimace but only when no one else on stage could possibly detect his dismay. As Billy, Emily’s construction company employee, Isaac Lamb gives us a good-hearted teddy bear of a man, and Holleye Gilbert, as John and Emily’s daughter Jenny, very ably conveys the frustrated deep-seated ambivalence she feels toward her mother — a woman who could never offer Jenny the tenderness she so desperately sought.”
*
Posted by Dot Hearn at 2:21 AM No comments:

FREE for all, Welcome. 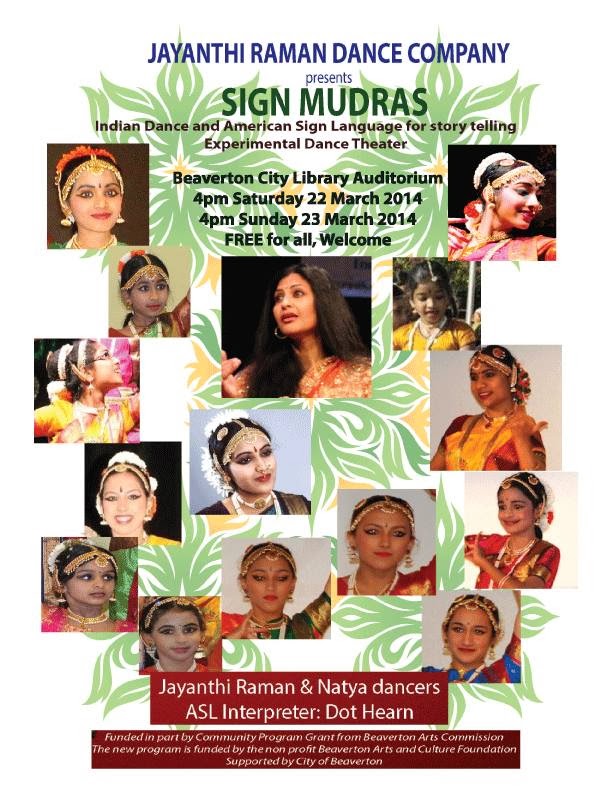 Funded in part by Community Program Grant from Beaverton Arts Commission. The new program is funded by the non profit Beaverton Arts and Culture Foundation.
*
Posted by Dot Hearn at 1:38 PM No comments: