From acclaimed director and playwright Toshiki Okada, Artistic Director of the internationally-lauded chelfitsch Theatre Company, comes a chronicle of post-college ennui and 21st Century relationships in Japan’s Lost Decade Generation.  The static lives of several self-obsessed GenX internet café clerks are thrown out of balance by the presence of a younger female co-worker, who rightly makes them question the meaning of their lives in a shifting socio-economic landscape.
“While these overeducated and underemployed members of the nation’s lost generation keep saying, “you know,” none of them do. Bittersweet drama…distinguished by a style that turns inarticulateness into the sort of poetry that rewards close listening.”        ~ The New York Times 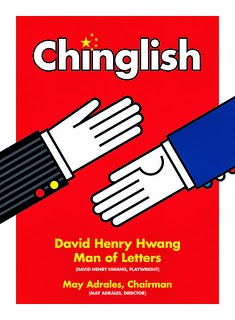 Summary:
An American businessman heads to Asia to score a lucrative contract for his family’s firm—but the deal isn’t the only thing getting lost in translation when he collides with a Communist minister, a bumbling consultant and a suspiciously sexy bureaucrat. Hilarity ensues in this new comedy by Hwang, award-winning playwright of M. Butterfly and Golden Child.

This play may be particularly interesting to the Deaf Community, because a main part of the story is about cultural and linguistic differences, the use of interpreters, and what can happen due to mistranslations. The translations may be between spoken English and spoken Chinese, but the process and challenges are very like what can happen with interpreting between spoken English and ASL.
Posted by Dot Hearn at 1:14 AM No comments:


"Eyes for Consuela" SUMMARY: "Awoken from his dreams, Henry, an American with a quiet past, throws himself into the Mexican jungle chasing after shadows of regret. Entranced by adventure, music, and his own obsession, he finds himself in a game where the rules move to an unknown rhythm and the truth is in the eye of the beholder."

This play runs approximately 85 minutes with no intermission.

DISCOUNTED TICKETS are available through these options (you must call the Box Office):
- Chinook Book Coupon.
- Arts Card holders who participate in the Work for Art program.
- Arts for All: $5 tickets for SNAP cardholders (limit 2).
- 30-and-Under Rush: $15 (one hour before curtain at will call for every performance).
*
Posted by Dot Hearn at 7:52 PM No comments: