This fairytale concoction of teen angst and devastating loss make for a grisly good time in this crackling new “thrilledy” — a stew of dark comedy, family drama and fantastical carnage. It’s 1978 and 13-year-old Chris is reeling from her mom’s illness and recent death. Throw in dad’s new girlfriend (mom’s ex-nurse!), a few freaky little creatures and the boy next door, and things really get out of hand. Part monster tale and part revenge tragedy, the highly theatrical FEATHERS AND TEETH delivers a meaty exploration of grief and obsession.

RUN TIME: 90 minutes with no intermission


Short trailer:  [transcript: 70's rock music in the background and splashing sounds; along with creature noises when the pot appears]

"In The Heights" interpreted performance “Hamilton” creator Lin-Manuel Miranda wrote the music and lyrics based on the book by Quiara Alegría Hudes.

In the Heights centers on a variety of characters living in the neighborhood of Washington Heights, on the northern tip of Manhattan. At the center of the show is Usnavi, a bodega owner who looks after the aging Cuban lady next door, pines for the gorgeous girl working in the neighboring beauty salon and dreams of winning the lottery and escaping to the shores of his native Dominican Republic. Meanwhile, Nina, a childhood friend of Usnavi’s, has returned to the neighborhood from her first year at college with surprising news for her parents, who have spent their life savings on building a better life for their daughter. Ultimately, Usnavi and the residents of the close-knit neighborhood get a dose of what it means to be home.

DATE & TIME: Sat. 3/4/17 at 2:00 pm
LOCATION: 1515 NW Morrison, Portland 97205
On the Alder (lower) Stage
TICKETS: online with code ASL or call 503.241.1278
Interpreters: Rich Hall and Carolyn Brockway
"In this inquisitive new drama, a family grapples with the difference between a life lived and a life remembered as 85-year-old Marjorie struggles to keep hold of her memories and identity, gently assisted by an artificial version of her late husband, Walter. An exploration of aging, memory and technology, MARJORIE PRIME peers into what lies ahead and how our past is rewritten to face today."- 2015 Pulitzer Prize finalist for Drama- Season 4 writer/producer on Orange Is the New Black- NW Premiere 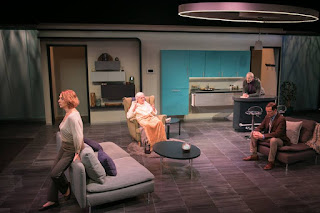