Performances run approximately 2 hours and 30 minutes with one intermission.


“But as Ruhl writes it, and Adriana Baer directs it for Profile, and her sparkling cast acts it, the joke’s a lead-in to some more probing explorations of gender, tenderness, emotional fulfillment, and the dawning of women’s rights…Profile’s In the Next Room is quite lovely to look at, with an ornate yet open set by Stephen Dobay and some ravishing period costumes by Sarah Gahagan.” – Bob Hicks, Oregon ArtsWatch "From the brilliant, comedic mind of David Ives (All in the Timing, Venus in Fur) comes a hilarious “translaptation” of this 17th Century French romp, replete with wild misassumptions, mistaken identities and tangled truths. Played out in outrageously clever verse, expect lightning-fast pace, anachronistic twists and a hip cast, with plenty of nods to Corneille’s neo-classical original. 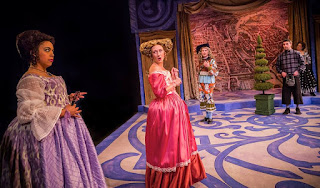 RUNNING TIME: Approximately 2 hours plus one intermission."
*
Posted by Dot Hearn at 11:18 AM No comments: