We Can Listen and Urban Haiku presents: 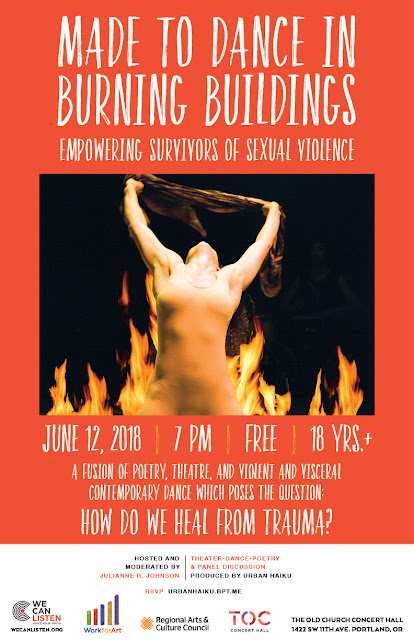 Screenings of socially conscious art, a talk by artist Anya Pearson,
and a panel discussion, which ask the question:
How do we heal from trauma?

Anya Pearson is an award-winning actress, playwright, poet, producer and activist living and working in Portland.Anya is the author of the choreopoem, Made to Dance in Burning Buildings, which is a fusion of poetry, theatre, and violent and visceral contemporary dance which explores PTSD and trauma. The showcase production of Made to Dance in Burning Buildings recently played to a sold-out house at Joe's Pub at The Public Theater in New York City. NY Theatre Critic, Anthony J. Piccione, called it a "standout." The World Premiere of Made to Dance in Burning Buildings will take place at Shaking the Tree Theatre in Portland in February 2019. She is also producing a documentary, which follows the development of the play as well as her passionate quest to empower other survivors. The documentary will also feature the stories of other survivors.Anya's latest piece, Above a Whisper, is a fusion of poetry, narrative, dance, visual art, and film about Sexual Harassment. An excerpt of this full-length piece debuted at Shaking the Tree's SALT in May 2018 in Portland, Oregon. Anya is the inaugural winner of the prestigious $10,000 Voice is a Muscle Grant from the Corporeal Voices Foundation ran by best-selling author Lidia Yuknavitch. Anya has recently received a $10,000 commission from Bag & Baggage Theatre in Hillsboro to adapt Measure for Measure with an African-American lens focused on the prison industrial complex. As an actress, she has appeared in numerous regional theater productions as well as independent films. She is a proud member of Actors’ Equity Association. Her poems have been published in the literary journals Elohi Gadugi and M Review. Her poem, “The Accomplice” was also featured in the BaseRoots Theatre Company main stage show, My Soul Grown Deep, which she also co-produced. She is a graduate of the prestigious two-year program at the William Esper Studio in New York City where she studied acting with Terry Knickerbocker. She is also a graduate of the writing program at Marylhurst University. Her best production is truly her 5 ½ year old daughter, Aidan.We Can Listen is funded in part by The Old Church Concert Hall and RACC and strives to build community, educate, and share the positive impact that truly listening to diverse voices can have on us all. Through a cultural intersection of storytelling, film, music, and personal expression we support individuals and grassroots organizations as they raise their voices on compelling social justice issues Portlanders have demonstrated are important to them. We hope these persona stories will reach audiences they haven’t reached before, and provide the opportunity, for all who hear them, to increase their understanding of issues that require action and awareness in our greater community.Moderated by Grammy-nominated local recording artist and theatrical performer, Julianne R. Johnson, each We Can Listen event explores a topic of current, social, political, or environmental importance in an atmosphere of trust and respect for both speakers and audience alike.