His Eye is on The Sparrow - interpreted

Portland Center Stage at The Armory present
an interpreted performance of


His Eye is on The Sparrow


A musical biography of Ethel Waters 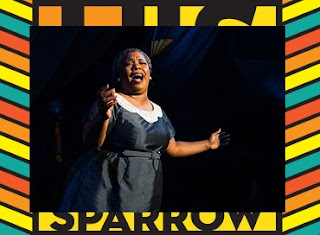 After a rough and spirit-breaking childhood, Ethel Waters became a Vaudeville success, a recording sensation and crossed racial barriers to emerge as a Broadway and Hollywood star. But a reputation for being difficult and her own distrust of those who might employ her or love her — partly a response to the horrors of Jim Crow America — caused her to lose everything and become a recluse, until she found new strength as a gospel performer. Through it all, there were the songs – the ones that gave her solace and the ones that made her a legend. This is her remarkable story, filled with the greatest hits of a lifetime, including “Stormy Weather,” "This Joint is Jumpin'" and “Am I Blue?”

Run Time: Approximately 2 hours and 10 minutes, including one intermission.Note: Recommended for ages 14 and up. Contains some mature content and language. Children under 6 are not permitted at any production.