Important and Timely:"We Are Proud To Present..." - interpreted performance this week


We are Proud to Present a Presentation about the Herero of Namibia, Formerly Known as South West Afriva, from the German Sudwestafrika, between the years 1884-1915 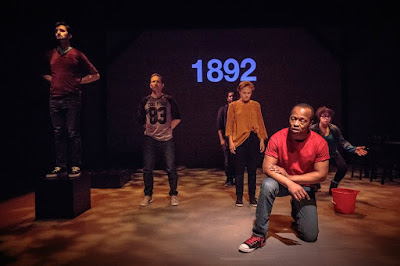 
A multiracial cast of six idealistic actors sets out to improvise a story about the first colonial genocide of the 20th Century in Africa, but get lost in the reality of their undertaking. The unusual presentation, humor and inevitable discomfort of this provocative new play gripped theatre hubs like New York, Chicago, London, Washington D.C. and Seattle with its unique theatrical investigation of prejudice, power and perspective.

NOTE: *This play uses irony, satire, racially charged language and symbolic violence to examine power, racism and perspective. We recommend this play for patrons 16 and older.*


POST SHOW DISCUSSION - This production is intended to engender conversation. Please join us for facilitated conversation about We Are Proud to Present; the discussion will be interpreted. The facilitator for the discussion following this performance will be Jo Ann Hardesty, President, NAACP Portland.